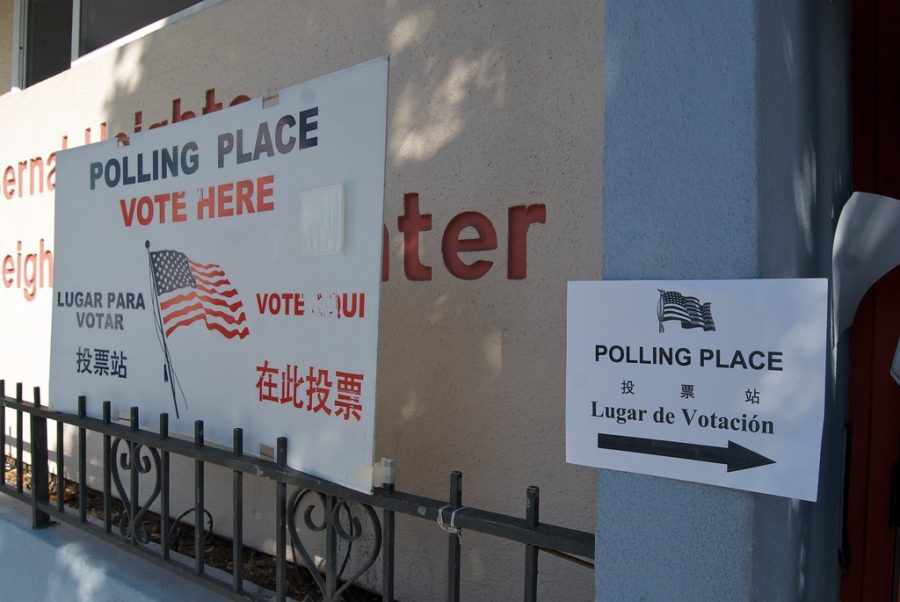 Signs call attention to a US polling place. Election Day is today, Nov. 3, 2020, but it may take over a week for the race to be called.

Your guide to the 2020 US Election

Day Five: Joe Biden has won the election and is projected to be the 46th President of the United States. Alaska, Georgia, Nevada and North Carolina have not yet been called.

Day Four: Reports in Nevada, Georgia and Pennsylvania show Biden leading as of this morning. North Carolina and Alaska are supporting a Trump lead. Mail-in ballots are still being counted, but Georgia has started a recount.

Day Three: As mail-in ballots from Georgia, North Carolina, Pennsylvania, Nevada and Alaska are still being counted, there has been no winner projected. Nevada’s results were expected to release today, but they paused ballot counting this evening. It remains unclear when results from other states will release.

Night Two: Far into the second night of the election, no winner has been declared, and Georgia, North Carolina, Pennsylvania, Nevada and Alaska have still not been officially projected. Georgia’s remaining mail-in ballots are still being counted, but there seems to be a close tie between Biden and Trump. Nevada has stated that they will attempt to report their results in the morning, as many voters urge them to quickly share. Biden currently needs six more votes to win, which he could get through Nevada, and Trump needs 56. These next 48 hours will be critical as final results release and the race is called.

Morning Two: Overnight calls included Trump winning Texas (38) and Biden flipping Arizona (11) and winning Maine (4). Biden currently leads with 238 votes, but Trump does not trail far behind with 214 votes. Many ballots are still being counted, and projections for Michigan, Wisconsin, Georgia, North Carolina, Nevada, Pennsylvania, and Alaska have yet to release. AP data shows that Biden leads in Michigan, Wisconsin, and Nevada, while Trump leads in Georgia, North Carolina, Pennsylvania, and Alaska. Absentee and mail-in votes are preventing votes from Pennsylvania, Georgia, North Carolina, and Michigan from officially being projected. Detroit Free Press reported that Michigan’s Secretary of State believes that all votes would be counted within 24 hours (as of 11:24 p.m.).

Night One: Election Day has officially come to an end, with polls being closed across the country, but the next president is far from being decided. The Associated Press’s final results as of 12:00 a.m. CST show Biden with a lead of 223 votes and Trump behind with 174 votes. Many of the key battleground states have not yet been called, but AP has provided explanations for state calls (and lack thereof). Mail-in votes are still being counted as many states were not able to start counting until polling closed. The projections do not seem to be in either candidate’s favor at the moment, and it remains unclear how long it will take for results to be reported. ABC News correspondents have stated that polling places are seeing much slower counting than they had anticipated, with Pennsylvania counting 10,000 mail-in ballots an hour as compared to their projection of 32,000. The results from mail-in and early voting will imminently change the election, according to analysis from ABC News and The Associated Press, but it can be said with confidence that this is a tight race.

Morning One: The 2020 Election Day has officially begun, but some votes have already been cast through early and mail-in voting. If you are voting today, know your rights. Issues such as voter intimidation have been highlighted in this election, and it is important to recognize that among other rights, you should stay in line to vote after polls close, can request a new ballot if you make a mistake and may receive assistance if you have trouble reading or writing English. The ACLU has compiled a complete list of your rights as a voter and contact information if issues arise.

The voice of each voter and state matters, but eleven states have been identified as battlegrounds to pay attention to. These include Arizona, Florida, Georgia, Iowa, Michigan, Nevada, North Carolina, Pennsylvania, Ohio, Texas and Wisconsin. Swing states in the Southeast are expected to quickly count and report their results, Midwestern and Western states will likely release later on election night, but counting all votes across the country could possibly take days.

Although polling closes and counting begins today, results will likely take more than one day to count. Both candidates are prepared to address the nation in the case of victory, but it remains unclear when one will officially receive the 270 electoral votes required to win. The Associated Press has projected outcomes for the election per their connections. These are NOT  verified results and are only reflective of election calls before a winner was declared. Other states may continue to finalize a lead afterwards.

The following reports are shared as called by The Associated Press:

While polling places will still be open across the country, early exit poll results are expected to release beginning 4 p.m. CST. These will not serve as an official prediction of winners in each state but instead describe who voted and what caused them to vote.

CNN’s initial exit poll results have shown that voters are concerned over all of the primary topics discussed during the debates, but they strongly seem to be concerned about how the government plans to combat COVID-19 and focus on the economy. According to the results, “Roughly 7 in 10 Trump backers say rebuilding the economy should be the nation’s priority over containing the spread of the virus, while among Biden supporters, nearly 8 in 10 go the other way, saying that containing the coronavirus should be the bigger priority.” Election security concerns, however, seem to have risen in the Black community, with only half of the respondents found casting their ballot to be easy in comparison to the three-fourths of white voters.

Demographic analysis of voters from The New York Times showed that Biden’s voters were primarily people of color, members of the LGBTQ+ community and of a younger age. A key highlight is that a large percent Black and Latino men and women voted for Biden. Voters for Trump were predominantly white and Christian. A majority of voters for Biden described a worsening in financial situation over the past for years, while Trump’s supporters stated that were doing better. 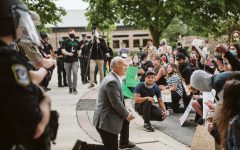 Mayor Chirico shares his views on the 2020 election and pandemic 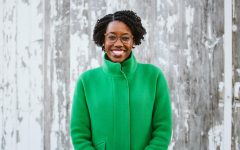 From Wildcat to Democrat

Trump falsely declared victory around 2:00 a.m. on Nov. 4, 2020. In an address to the nation, he urged states to stop counting their votes and that continuing would be “major fraud in our nation.” He threatened to take his case to the Supreme Court if votes continued to be counted, and as of 9:00 p.m. on Nov. 4, 2020, Trump has filed lawsuits against Georgia, Michigan and Pennsylvania.

The Trump campaign has been considering seeking a recount in Wisconsin. While Wisconsin law states that Trump is eligible to request a recount a week after the election, data from past recounts has shown that recounts in Wisconsin changes the vote count by a few hundred, but Trump is behind by approximately 20,000 votes.

USPS has struggled to trace 300,000 ballots and did conduct a facility sweep ordered by U.S. District Court Judge Emmet Sullivan for Tuesday morning. 12 postal districts were ordered to sweep ballots before polls closed, but they continued business as usual. According to The Philadelphia Inquirer, Sullivan has now scheduled daily hearings and data reports, and he has required the Postal Service to provide him with written explanations as to why districts are facing poor performance. If these requirements are not met, Sullivan agreed that the “Postmaster [General] is either going to have to be deposed or appear before [him].”

The FBI is currently investigating robocalls targeted towards voters on Nov. 3, 2020, urging them to stay home and claiming that the election has been extended. Amidst fear of voter suppression and COVID-19, the FBI encouraged “the American public to verify any election and voting information they may receive through their local election officials” but did not provide more details.

About the Contributor
Aarti Gupta, Editor-in-Chief

Aarti is a senior and a second year member of The Echo. While she's not editing, she can be found watching yet another sitcom, updating her Goodreads or...

Donate to The Echo
$505
$500
Contributed
Our Goal
Submitting donation...