Notorious: "famous or well known, typically for some bad quality or deed."

Being a celebrity comes with its many perks—and many downfalls—one being the knowledge that everything you do is being watched. Whether it be wearing an outfit that isn’t rated as “trendy” or going out with another celebrity that sparks dating rumors, the paparazzi—and fans—are always watching. So when you attempt to commit murder at an early age and then continue to release music as if nothing happened, backlash is expected.

Snoop Dogg, also known as Calvin Broadus, is a massive name in the Hip-Hop world. He has released “18 studio albums, five collaborative albums, 17 compilation albums, three extended plays, 25 mixtapes, 175 singles (including 112 as a featured artist), and 16 promotional singles” according to officialcharts.com He’s done this all while finding the time to post his life updates and videos of himself getting high on Instagram. His fame is exceptional, but his life was not always about music and partying.

Snoop Dogg was a former gang member for the Crips, a famous gang that has been in a longstanding rivalry with the Bloods. In 1993, Snoop Dogg was charged with first degree murder for the shooting on Phillip Woldemariam who was a member of the Bloods. While he did not shoot the fatal shot, he was involved. Stupidly enough, he released an album titled “Doggy Style,” which featured the song “Murder was the Case.” This song detailed a gruesome crime and did not bode well for Snoop in court.

Johnnie Cochran, who also represented OJ Simpson, was able to get Snoop Dogg acquitted. The rest was history, and Snoop Dogg continued to release music. He even appeared on Martha Stewart’s television show, causally cooking and laughing it up with the “mother of crafts.”

It is very odd considering that Snoop Dogg has been a part of a murder, yet he  is still releasing music and having the time of his life partying and hanging out with well known celebrities. He has even hosted a New Year’s special two years in a row with Kevin Hart! Technically, Snoop Dogg did not shoot the fatal shot, but he was involved. Plus, he was a part of a gang, but many celebrities are as well.

Snoop Dogg should have faced more repercussions for his actions, but in the grand scheme of things, his notorious level is not the worst of the worst. He escaped the life of being in a gang. He now works with “Habitats for Humanity, Orca Network, The Healing Circle, Save a Life Foundation, and Shriners Hospital for Children. He also founded the Snoop Youth Football League. His estimated donations throughout the years total over $110 million” according to killerpapers.org. His actions were wrong, but his attempt at a better life is noteworthy. 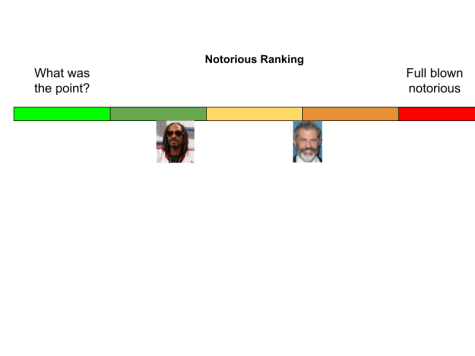 Maya is a senior at Neuqua Valley High School and a second year member of the Echo. She is involved in soccer, Rho Kappa Executive Board, French Society...