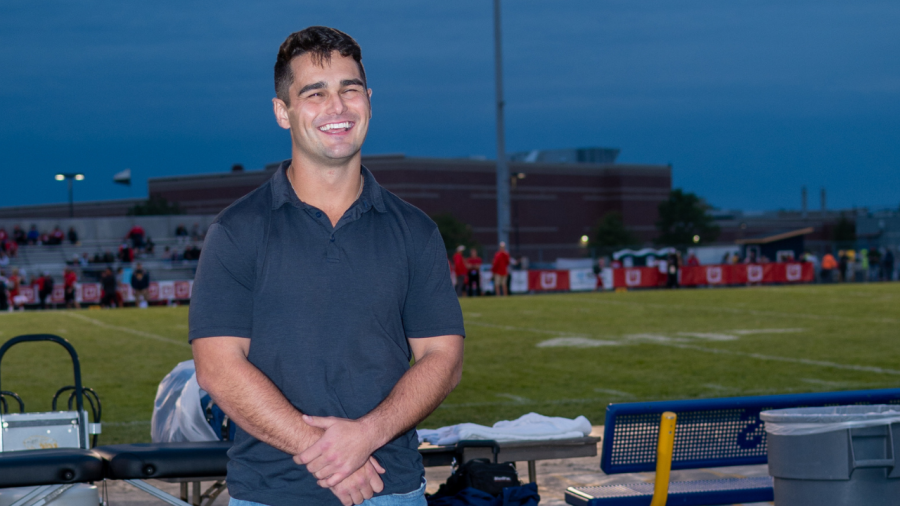 Joey Rhattigan sports a huge smile as he’s inducted to the hall of fame.

It’s really been great to go to Neuqua. I think they do a great job at preparing people for life after high school. I went and attended Princeton University. I played sports there until all the time management skills and all of the communication skills that are necessary to be a student athlete and to meet all those high demands, I really did learn kind of the basics of that going through high school at Neuqua Valley. It’s been really useful even to this day kind of time management and communicating really well.

What do you recall as your most impactful or memorable experience as a student athlete?

You know it’s funny, I drove down here with a couple teammates of mine from high school, so we had about an hour and a half to talk about some of the games that we played together and whatnot. It’s really a tie. The second time we beat Wabounsie was certainly something that we all cherish, but the Bolingbrook game has kind of stood throughout time is it as a standout game, so [it was] definitely a lot of fun to play in that game as well and I think I think it’ll be hard to forget that one.

If you could advise present and future student athletes, what would you share with them?

What does it mean to you to be inducted into Neuqua Valley’s Hall of Fame?

I’m really proud, and I’m honored to be inducted into the Hall of Fame. While it’s my name that’s going to be kind of etched into the Hall of Fame, I think that and I hope that everybody that played on that 2012 team can really take that as honoring them because a lot of work went into that season. When we’re in training camp, these coaches spend more time with us than they do with their families and just realizing that and winning the games that we did and playing the way that we played, it’s something to be celebrated. Football is the ultimate team game, so while it’s my name that goes into the Hall of Fame, I think it’s great to celebrate everybody on that 2012 team.

What do you love about football? What keeps you going as you play?

So I’m done playing football now, but when I wanted to play in college, I always had a dream of playing professional football when I was a kid. So that really drove kind of my entire football aspiration. I wanted to play in the professional football league, and you come up just short in college: your body starts to break down a little bit, but the motivating factor to make it to play professionally. In that pursuit, you realize all of the benefits of pursuing a big goal, a big dream. That leads to learning how to work hard, learning how to be consistent, learning how to be accountable, all of those kinds of intangible skills you learn through football. So what started as a little kid with a dream to play in the NFL, it kind of just turned to part of who I was. I was a football player and I was proud of that, and it took me a lot of places I never thought I’d go.

It’d be my family. Those are the people that I see every day. I was blessed with two brothers that were also very good football players, and we were competitive, and so I was in an environment where we all wanted to be better than each other, so that really kind of pushes you to be your best self when you have somebody that’s also trying to be better than you they look just like you. I would say my family has been the biggest motivator driving course.

Donate to The Echo
$85
$500
Contributed
Our Goal
Submitting donation...