The first and only Vice Presidential Debate of the 2020 election

The first and only vice presidential debate of the 2020 election was held on Oct. 7, 2020 at the University of Utah in Salt Lake City. Susan Page moderated the debate between Democratic nominee California Senator Kamala Harris and Republican nominee Vice President Mike Pence. The candidates were 12 feet apart and separated by plexiglass as a safety precaution.

Page was the only person to know what questions and topics would be covered. Questions were posed to each candidate, who were each given two minutes to respond without interruption before open discussion. The topics covered were the pandemic, the role of the vice president, the economy, climate change, foreign policy, the Supreme Court, race in America, the transfer of power, and a final question from a young student.

Currently, the Trump administration advises proceedings for the coronavirus. Senator Harris shared what the Biden administration would do differently in January and February, focusing on their hopes to implement “contact tracing,… testing,… administration of the vaccine and making sure that it will be free for all.”

Pence was asked why the death toll in America is so much higher than that of other developed countries. He had no definite response, instead focusing on how they suspended all travel from China, have been delivering supplies to doctors all over the country and plan to have vaccines by the end of the year. He also defended how the Trump administration expects Americans to follow guidelines, “when you were at the White House have not been doing so”, by saying that while they have confidence in the American people, the work of “the president goes on.” There have been many safety precautions, such as proceedings being made outdoors, made considerately.

Role of the vice president

Each candidate was asked if they have spoken with their superior about a plan in the case of presidential disability. Pence continued to discuss the pandemic, while Harris shared how she and Biden plan to uphold the values of “hard work, public service, [and] fighting for dignity of all people.”

The Biden campaign has been promoting programs to boost the economy by raising taxes. Harris said that their primary concern is strengthening the economy based on the “American worker and the American family.” Biden plans to get rid of Trump’s tax act on day one and invest in infrastructure, clean energy, and education.

The Trump administration has been hoping for a speedy economic recovery, but it has not gone as fast as they were aiming for. Pence was asked if Americans should brace themselves for a difficult time returning to a booming economy. He claimed that they have “spared no expense to help the American people” and shamed Biden for proposing raising taxes. Senator Harris in turn clarified that Biden will not raise taxes on people who make less than $400,000 and stated that Biden is responsible for the Recovery Act of 2008 that Trump was trying to take credit for.

In response to recent hurricanes and wildfires, Pence was asked if he believed that man-made climate change has impacted these disasters. He claimed that “air and land are cleaner than any time ever recorded” which is a result of a “strong, free-trade economy.” While he admits the “climate is changing,” he does not support government mandates.

Harris was then asked to clarify how the Biden-Harris campaign feels on the Green New Deal as a whole. She stated that they will create around 7 million more jobs associated with “clean energy and renewable energy” and plan to reenter the Paris Climate Agreement.

Earlier on debate night, Trump said that “China will pay” for causing the coronavirus. The USA’s relationship with China remains unclear, and each nominee was asked to describe what our fundamental relationship with China is. From Pence’s perspective, “China is to blame for the coronavirus,” but Harris believes that the Trump administration has had a “failure of leadership.” She was asked to define the role of American leadership in such a situation and responded that Biden told her “foreign policy might sound complicated,” but it is “just relationships.” Defending himself, Pence described how the Trump administration seemingly destroyed ISIS and how they are still bringing people to justice today. While Harris acknowledged this, she said that Trump called people in the military “losers” and “suckers.” Pence argued that Trump respects people in the military.

As the former governor of Indiana and Senator of California, respectively, Pence and Harris  were asked what they believe their states should do if Roe v. Wade is overturned. In response to the question, Pence simply stated “I’m pro-life. I don’t apologize for it.” Harris, on the contrary, insisted that they should “let the American people fill [the seat in the White House] and then we’ll fill [the Supreme Court] seat.” She said that she will always fight for women’s right to an abortion.

Pence later asked Harris if the Biden administration would “pack the Supreme Court to get [their] way” if Barrett filled the seat. There was no direct response given by Harris, which Pence verbally noted.

Breonna Taylor’s tragic death was discussed, and the candidates were asked if they thought she received justice. Harris began with “I don’t believe so” and went on to discuss the peaceful protests for equality. Biden and Harris hope to implement a series of plans which include banning chokeholds, forming a national registry of police officers who have broken the law and getting rid of private prisons and cash bails. Pence took a different stance, saying “[he trusts] our justice system” and that he “will always stand with law enforcement.”

Harris criticized how Trump refused to condemn white supremacists, placed a Muslim travel ban and described neo-Nazi protests and counter protests by saying “there were fine people on both sides.” Pence claimed that Trump has condemned white supremacists many times and “respects and cherishes all of the American people.”

A final question was pulled from an eighth grade student. “If our leaders can’t get along, how are the citizens supposed to get along?” Pence said that “in America, we believe in a free and open exchange of debate… We can disagree… but when the debate is over, we come together as Americans.” Harris meanwhile praised Biden as someone who has a long standing record of working “across the aisle” and stated that “we fight for each person’s voice through their vote.”

If you are interested in finding more information about voting in this upcoming election, visit vote.org

Recap of the First 2020 Presidential Debate 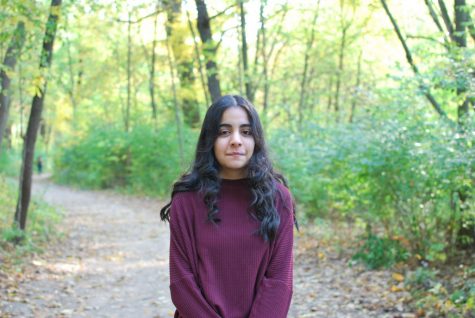 Aarti is a junior and a first year member of The Echo. She enjoys watching sitcoms, listening to Big Time Rush, and forcing her best friend to listen to...

If you want a picture to show with your comment, go get a gravatar.