From Sandy Hook to Uvalde: Why are we still here? 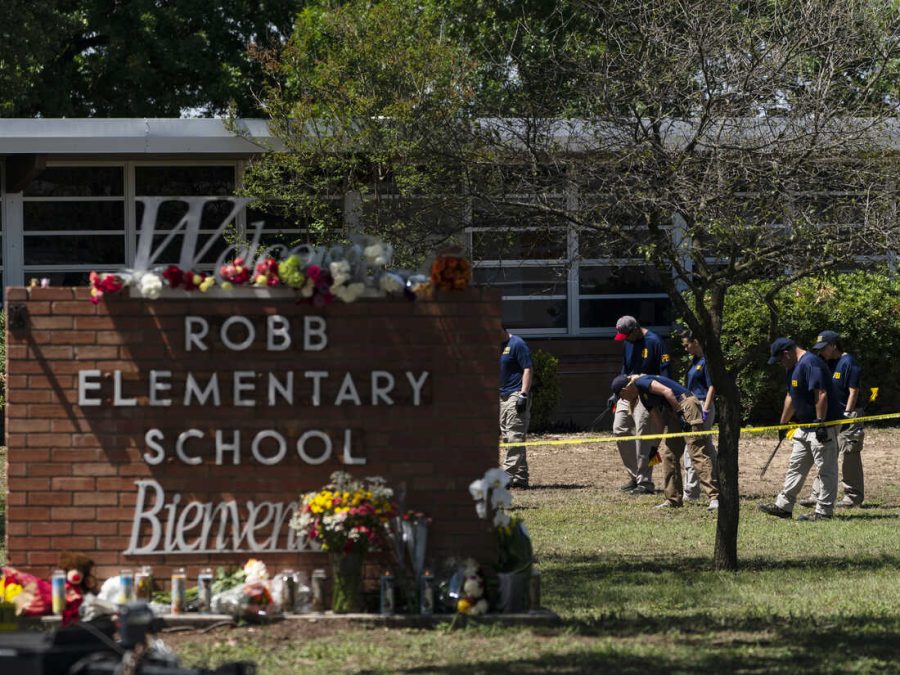 Investigators search for evidences outside Robb Elementary School in Uvalde, Texas, Wednesday, May 25, 2022. Desperation turned to heart-wrenching sorrow for families of grade schoolers killed after an 18-year-old gunman barricaded himself in their Texas classroom and began shooting, killing several fourth-graders and their teachers. (AP Photo/Jae C. Hong)

As we have all heard, the disastrous school shooting in rural Uvalde, Texas on Tuesday was yet another in a string of mass shootings in America that have failed to garner any actual change. Hundreds of mass shootings take place in America each year, and each time, grievances are aired, strong desires for change are pushed and the wrongs of America’s gun policies are detailed. However, nothing is ever actually changed. The heavy strife that immediately follows any of these shootings eventually dies over, and Congress yet again fails to pass any significant gun-control legislation. Despite constant pushing by Democrats and notable attempts by Congress to enact gun-control legislation, these proposals have all been eventually defeated. As a matter of fact, Texas Democratic gubernatorial candidate, Beto O’Rourke, interrupted Texas Gov. Greg Abott during a press conference in Uvalde after the school shooting, calling out many  Texas legislators for their lack of preventative action. So what is the next step? While bills are being passed by Democrats to address the severe problem that lack of gun-control poses, it is still very unlikely that these bills will eventually get passed in the Senate. This being said, Democrats and other activists are continuing to lobby for change, and hopefully this change will manifest itself into more Democrats being elected for office during the following elections in November.

In 2022 alone, there have been “more than 200 mass shootings in the United States” and the shooting in Uvalde was “one of 27 school shootings.” These tragedies have unfortunately become a common occurrence in the United States, and have left the argument concerning gun rights practically diminishing the importance of fighting for a side. 2022 started off with the Auburn High School shooting and it’s most recent being Robb Elementary in Uvalde, Texas. As of now, “27 people have died in 2022 as a result of school shootings, with 24 deaths being students or children and three being school employees or adults.” President Biden was faced with questions, “Why are we willing to live with this carnage? Why do we keep letting this happen? Where in God’s name is our backbone?”, all in despair for why our country continues to allow these horrific events to occur. But still congress is yet to thoroughly debate this topic, and earn justice for all who have lost their lives to gun violence.

Being students ourselves, the shooting has had a profound impact on our beliefs about how protected we are at school, and it has also undoubtedly had a great effect on our parents as well as many others across the country. Parents send their children to school with the assurance that they will be safe within the school walls, but the recent shooting—as well as the many before it and the many to come—has shaken many parents’ belief in exactly how protected their kids will be upon entering school buildings. The Ulvade shooting has once again corroborated the fact that unless action is taken, this cycle of events that follows shootings and ends in nothing actually being changed will doubtlessly continue.