Grease: Rydell High School comes to Neuqua in the musical of the year 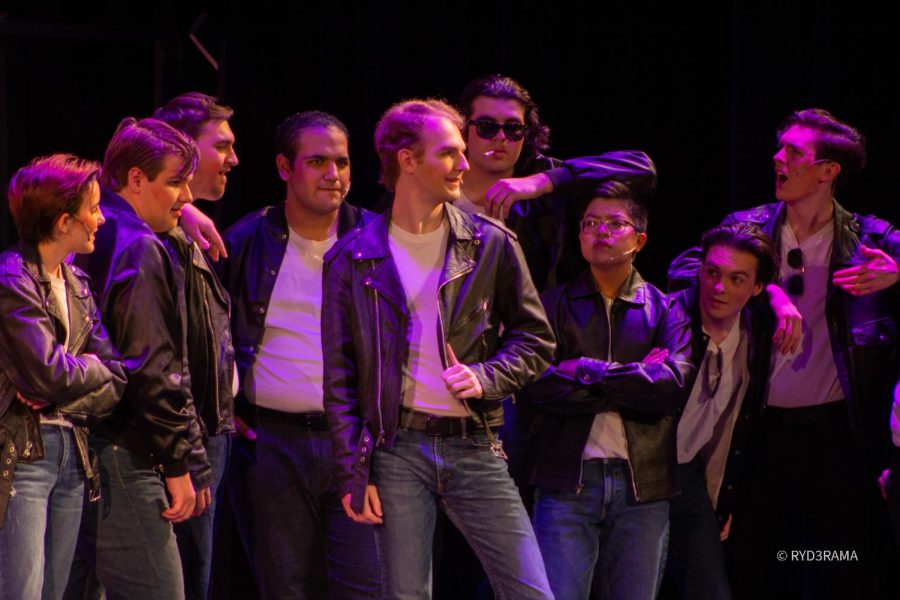 The greasers in the Grease musical

This past weekend, April 28-May 1, Neuqua Theatre returned for its first in-person musical since the pandemic by introducing “Grease.” The cast, tech crew, chorus ensemble, pit band, as well as the teachers, and directors worked tirelessly to make this production come to life.

The general plot of the musical starts with the lives of high schoolers, specifically a greaser named Danny Zuko and an Australian transfer student named Sandy, who develop an attraction for each other during a summer romance. It is set in 1958. The musical is a rendition of the popular musical romance of the same name.

The cast members started rehearsals in February, in order to practice and prepare for the annual musical. Ben Meyer and Amy Wang star as Danny Zuko and Sandy respectively for Neuqua’s production. Many other students also worked hard to make the show such a success.

The show is full of colorful sets depicting the 1950s, especially the iconic Rydell High School. The set design was immaculate, with bright and popping colors that fit well with the vibe and time period of “Grease”. The stage crew worked toward building sets, organizing the lights and sound, and making sure there were no technical difficulties.

One set element that stood out to the audience was the “Greased Lightning” car. The car was lent to Neuqua by a theater company in Indiana, and it was the main part of the props featured in the musical. It was very cool to see the cars come on and off the stage so quickly during the show itself.

There were also a number of songs, which highlighted singing and choreography from the students, showcasing their musical talent. The talented voices of the performers were also very great to hear in person, as the cast rehearsed for a long time to make sure the school musical was flawless.

There was also a pit orchestra and band, where Neuqua’s very own students performed live some of the background music for the musical. These high school students practiced and came to rehearsals.

Some of my personal favorite moments from the show were the teen angels and their song, “High School Dropout,” the high school dance and their outfits, and the overall environment. Since “Grease” was a musical with such uplifting lyrics, it was a feel-good performance and the two hours went by so quickly.

The effort put in by all of these students truly paid off during the showings. The musical was a huge success, nearly selling out in tickets, as well as becoming the most grossing Neuqua musical production. “Grease” did not disappoint and all were left with bright emotions from the songs and plot. The cast and crew worked very hard to create a positive atmosphere through music and theatre and left the auditorium with a smile on their face.