“Everything Everywhere All at Once”: a wondrous, life-affirming oddity told on a cosmic scale 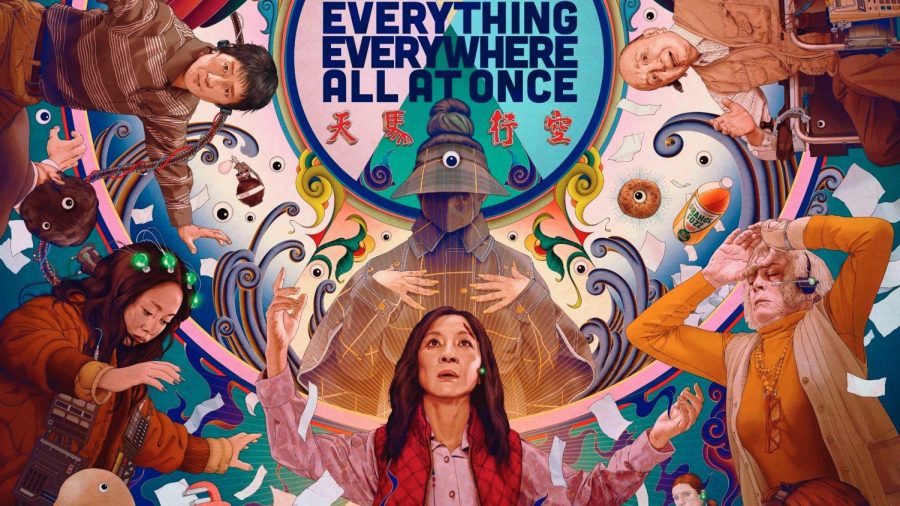 Hot dog fingers, “Ratatouille,” the films of Wong Kar-Wai and everything else you can imagine converge in Daniels’ immediate classic.

It’s fitting, really, that just a little under four months after “Spider-Man: No Way Home” ravaged the global box office and satiated the nostalgic desires of an audience that couldn’t be more slaphappy for a $200 million dollar cluster of cross-generational IPs and only a couple weeks before yet another multiverse-centered MCU movie is set to be churned out, that “Everything Everywhere All at Once” was released. Here is a film that’s possibly the exact polar opposite of the consumer-ready products that are formulated to perfection by a group of multi-millionaire producers in a lab, a dazzling high-wire balancing act with an irresistible daring and a genre confection for the ages. It’s either the most genius experiment or the luckiest accident, and surely one of the wildest rides of the year.

Doubly fitting is that such a vision comes from the directing duo of Dan Kwan and Daniel Scheinert, known as Daniels. Every creative effort the two have made together since 2011 has showcased their capacity for narrative and/or formal experimentation, like their Grammy award-winning WTF-fest for DJ Snake and Lil Jon’s “Turn Down For What” and their feature debut “Swiss Army Man” starring Daniel Radcliffe as a farting, talking corpse. But what grounds all of their bizarre odysseys is the bubble of emotion they wrap every idea in, and it’s seeing just how big it can get with each new element that makes them so impressive. It may only be Daniels’ second feature, but it’s hard to imagine that they’ll be able to push it further than “Everything Everywhere All at Once”’s miraculous fusion of its kinetic stream-of-consciousness and ever-expanding emotional bubble. Each mile-a-minute gag that gets expelled from its white hole center at the speed of light is a tremendous feat, and it’s their cementing into the dramatic elements of the film that elevates “Everything Everywhere All at Once” to an immediate classic.

At the center of this universe-spanning story is Evelyn Wang (Michelle Yeoh), an aging Chinese-American immigrant who, between the struggling laundromat she runs with her ingenuous husband Waymond (Ke Huy Quan) being audited by the IRS and her relationship with her lesbian daughter Joy (Stephanie Hsu) slowly going down the same path her and her father Gong Gong (James Hong) had, has never been more desperate for some sort of statistical inevitability to intervene in her life. Unfortunately for her, her escape from all of that and the meeting she has with IRS inspector Deirdre Beaubeirdra (Jamie Lee Curtis) isn’t in the form of a sweeping romance like the ones she distracts herself with on TV but the entire space-time continuum kicking down her door. Unbeknownst to Evelyn, she’s one of thousands of Evelyns, all of whom are the target of Jobu Tupaki, an omnipresent force that just so happens to be an alternate version of Joy from the Alphaverse. With the help of Alpha Waymond, Evelyn learns how to “verse-jump” and access the memories and skills of the lives she’s never led in order to take down Jobu Tupaki and her extinction-level creation: a bagel with quite literally everything on it that’s become an unstoppable black hole capable of destroying the entire multiverse.

As the title obviously implies, this film has everything, and to try and condense each wacky detail of Daniels’ bacchanalian, glittery melting pot into a synopsis is a borderline impossible task; the comic barrage that it offers is something that audiences should experience for themselves. Like how “Parasite” was a foreign-language film that I could still recommend to pretty much anyone, “Everything Everywhere All at Once” is a deeply weird (and weirdly deep) movie, yet one that’s an essential watch for anyone even remotely interested in anything involved with filmmaking. The screenplay—a strong contender for the best of the year, and the most original by a long shot—has a deliberately plotted foundation but couldn’t feel more spontaneous in its execution, mostly because of how visually dynamic it is. The multiple aesthetics the film wears and how tightly the editing weaves them together help support the inexorably swift pace it carries from the moment it hits the ground.

The real powerhouse of “Everything Everywhere All at Once,” though, is its ensemble. Ke Huy Quan’s trifecta of Waymonds is so instantly lovable that it feels as if the reality that this is his first major role in a film in well over twenty years is one straight out of the film itself, and I don’t think I’ll ever look at Jamie Lee Curtis the same after the caustic yet charming performance she gives here, but it’s hard to put into words just how phenomenal Michelle Yeoh is. Her physical abilities showcased in the film’s marvelously choreographed action are a reaffirming reminder that she’s still got some “Crouching Tiger, Hidden Dragon” in her, but it’s the dramatic side of her character that proves to be the most compelling because of how protean Evelyn is. The Evelyn that we’re introduced to is the ultimate combination of untapped potential and unfulfilled dreams, a woman on a life path where every decision she’s made has led her toward a dead end for any new ones, which is why her shell of a self is so good at embodying her more successful or absurd parallels and absorbing their sets of skills. Yeoh’s progression through the many stages of the same character—the farcical turmoil of being thrust into the multiverse, the romantic melancholy of her kung-fu movie star self in a beautiful Wong Kar-Wai homage and the surprising amount of emotion she brings to a variety of inanimate objects, for example—is effortless. Evelyn is the kind of role that should’ve been given to the woman who’s had roles alongside Jackie Chan and as a kickass Bond girl ages ago, but it’s clearly one that Yeoh’s career has been building towards for a long time. She, like everything else in the film, is nothing short of monumental.

But what holds together this sprawling amalgamation of top-class talent and offbeat humor is, as always, the emotion that Daniels suffuses it with. The core conflict of “Everything Everywhere All at Once” is the relationship between Evelyn and Joy/Jobu Tupaki, one that’s as loaded as any real mother-daughter relationship could get. As a mother, Evelyn is scared of Joy both incarnating the worst aspects of herself and growing parts that are the complete opposite; as a daughter, Joy just wants to find somebody that can understand what she’s going through before destroying not the multiverse and the matriarch inside of it that’s responsible for her suffering, but herself. It all comes to a head with one of the most transcendent match cuts I’ve seen in a theater—a hug between two small, stupid people with more force than a planetary collision.

It’s worth noting that “Everything Everywhere All at Once” is not a totally flawless film. Even if it’s a fitting culmination and a touching emotional peak for the story, the climax feels a little too easy, which is really just a result of it being more deliberate plotting than spontaneous execution unlike the rest of the film. The constant explaining throughout the entire first half or so, while ultimately necessary and still delivered in an engaging way, is still constant explaining. Thematically, there are a handful of moments where the optimistic nihilism couldn’t feel more like it came straight out of a Reddit thread. Also worth noting, however, is that whatever rough spots there are to the picture that Daniels has crafted feel infinitesimal when compared to the sheer size of its whole and even just its mere existence. It’s a film that’ll make you emotional over a woman playing Clair de Lune on a piano with her toes and later sobbing into her hot dog fingers, and one that I’m grateful to have seen in a packed theater. For everyone out there saying that Hollywood should make more original movies, it’s hard to ask for something better than this.