2021: a year of vast entertainment 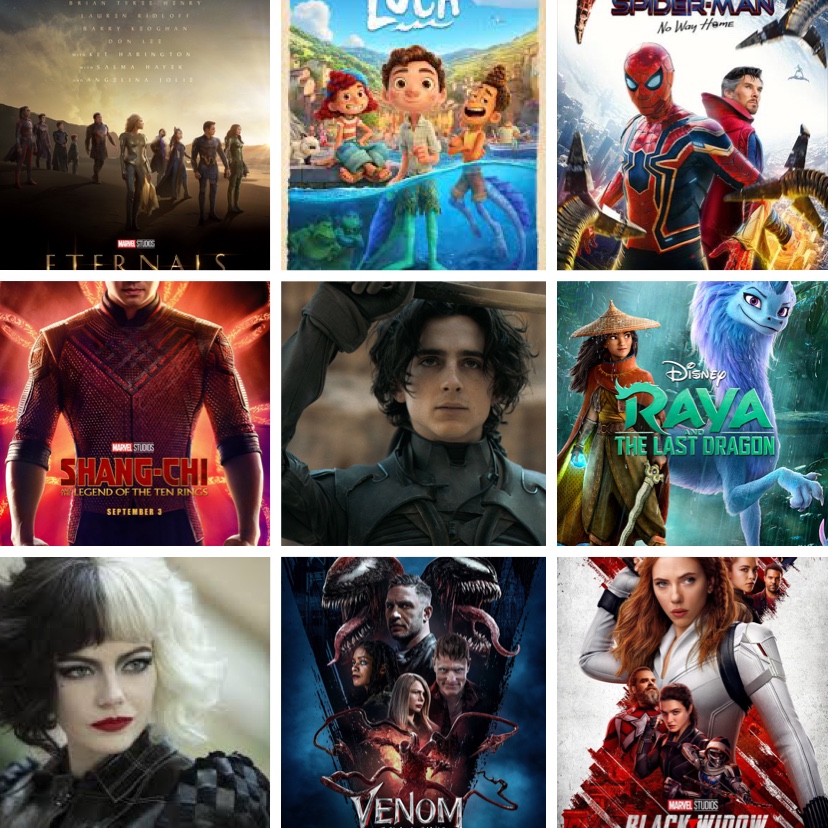 Some of the most popular movies released in 2021

This movie is definitely not the best form of entertainment from 2021. The plot is a little cliched, and the dialogues are extremely cringey. The actors are also a bit off, as they overreact a little bit in every dialogue they speak. It just does not seem like a very well done film; in fact, it seems a rushed attempt to put a movie together.

Based on the classic Disney World ride, “Jungle Cruise” is sure to amaze many with its amazing acting and special effects. The story, however, is boring. It’s interesting in the beginning since we find out some history about the characters, and their journey takes some wild turns that give us the thrills. However, after a while the movie gets quite repetitive and way too predictable. There were also too many advanced side plots towards the end of the film which disrupted the pace of the movie. Overall, it’s maybe worth a one time watch but nothing more.

There is no doubt that this movie is not one of Marvel’s greatest films, but even with all its flaws, it holds up to the standards of a typical Marvel movie. The exciting action scenes, the origin storyline and the characters are all directed amazingly, as the film did not shy away from making them extremely engaging. Scarlett Johanssen and Florence Pugh’s performances were extraordinary as well. However, the story lacked interest at times. The beginning of the film was engaging, but the middle dragged a bit and didn’t seem interesting enough for a Marvel film. Of course, being a Marvel studios film, this movie had extremely high expectations, which were met to some extent. However, it is obvious that “Black Widow” is not as successful as other films made by Marvel.

“Dune” was one of the most successful films released in 2021, and the success is justified. It is a great story with stunning visuals and outstanding direction. Every actor from Timothée Chalamet to Zendaya does a great job with playing their role and really gets in character. The only problem I had with this movie was that it felt like a short story put into a really long time span. The film was almost three hours long, and this length was very unnecessary since it caused the movie to significantly drag. There was also less dialogue and more action, which is not something that I personally like; however, many others might be fine with it. Overall, “Dune” was a decent film, but not the best one ever made.

This movie is extremely well done and interconnecting. When you watch it, you become really invested with the characters and the story really grows on you. Even though this is a Disney film, the story is quite dark. It’s very heavy, and frequently relies on themes of loss, war and trust. It doesn’t even shy away from showing some on-screen deaths, so it is definitely something that high schoolers can enjoy. The only reason I gave this movie a 9/10 is because the middle of the film got slightly repetitive, since it was the same story continuing for a while. However, this doesn’t stop the film from being great, and the final fight at the end makes up for the repetition in the middle. This film is definitely worth a watch.

This movie was a Marvel success. The storyline of the film was really interesting and well planned, and the stage presence of the actors was immaculate, especially Angelina Jolie. It also had good representation, as there were many actors of color involved in the film. The special effects were also super detailed and really cool to watch. Some people, however, found the storyline boring and too typical, while others were extremely happy with it. Since the film ended with a cliffhanger, it made the viewers extremely excited to see the next film. This movie is one of 2021’s greatest creations, and the overall marvel cinematic experience of this movie is yet to disappoint.

This light-hearted Pixar movie is sure to win everybody’s heart. The story is so wholesome, the characters are amazing and everything about the movie is great. The message is also great, since it teaches people to be happy the way they are instead of trying to hide their true identity. Many have even related this theme to being LGBTQ+, since the way the characters show their true colors mirrors the experience of coming out. The movie was also released in June, which is pride month. The friendship between Luca and Alberto (the main characters) is also so sweet, and it really melts your heart. They really stick with each other through all their hardships and it’s incredible. I would definitely recommend watching this movie, and I give it a solid 10/10.

This film is one of the best things to come out of the MCU. Everything about it is almost flawless. The plot is original and interesting, the characters are really well developed and unpredictable and the action scenes are really well done and formidable. It is also the first Marvel movie to have an Asian main character, which is great because of the Asian representation shown in the film. The visuals of the movie were also gorgeous, as they were done phenomenally. This is a very well done masterpiece, and it’s definitely worth a watch.

This movie is a very exciting and thrilling watch for people of all ages. The story is really gripping, and you immediately get hooked while watching this film. Even though the story is not exactly a murder mystery, the exciting twists and turns make it very similar to one. The origin story overall of “Cruella” is something that original “101 Dalmatians” fans will find intriguing, especially when Cruella is shown as a child. Emma Stone’s performance is also amazing and this movie really shows the versatility of her acting. “Cruella” is a must-watch for all who love thriller, action and suspense.

This was one of the best Marvel films that has ever been made. It was a very well done film and felt nostalgic because of the usage of cast characters reprising their roles. It was Spider Man’s Endgame, in the way that it was the final film of the franchise, and it had the same amazing finale energy as “Avengers: Endgame”. Everyone’s performance in the movie was phenomenal, and they all added a different element to the story that elevated the story. As saddening as it is that Tom Holland will not be able to reprise his role as Spider Man, this movie gave the viewers content as he ended his journey in an unforgettable way. The way all these aspects came together was really stunning and caused an emotional ending to the brilliant story.