Monsters of mediocrity: Chicago Bears move on from Pace and Nagy 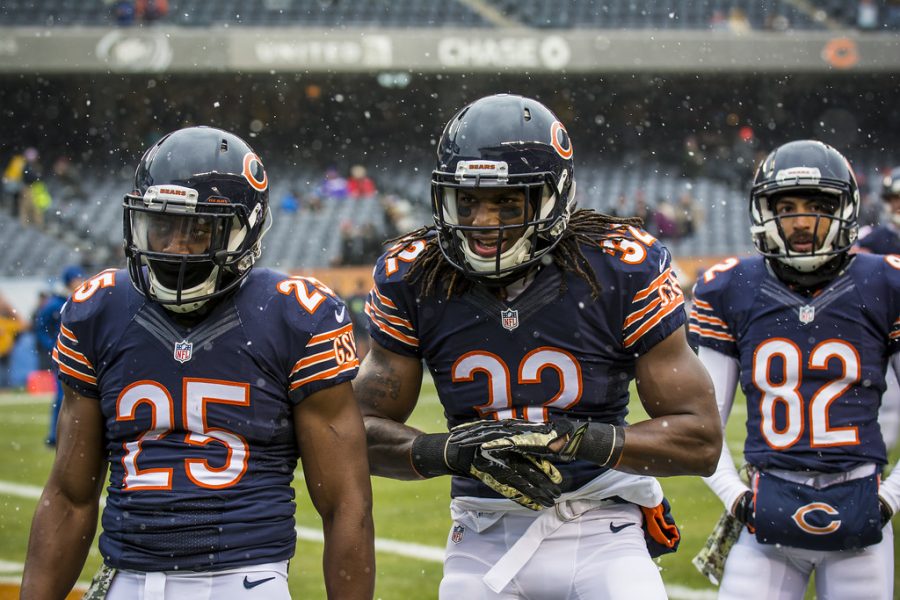 Three non-descript Chicago Bears players standing in all of their mediocrity.

As the Chicago Bears finally fired head coach Matt Nagy and general manager Ryan Pace this past Monday, Jan. 10, 2022 a sigh of relief was heard throughout the Chicagoland area. These moves marked the end of yet another tumultuous and unsuccessful Bears era. While the relief and “joy” ensued, the press conference from team chairman George McCaskey quickly quelled any hopes or naivetes. This is the same franchise we’ve always known, run by the same people, with the same mindsets. While many Bears fans actually do remain foolishly optimistic, all optimism has been sapped out of my nine year experience with this painful facade of a “prestigious” franchise. My dad warned me of this decision since day one: he’s seen it all before, and this blind faith has been sapped out of him decades ago. The Bears have abused that reputation for as long as possible, somehow being called prestigious despite only having six playoff appearances since the year 2000 and only one Super Bowl win in franchise history, the revered 1985 Chicago Bears (who dads in the Chicagoland area will never let go for the rest of their days).
In a game so heavily focused on offense, the Bears spent 230 million dollars on two linebackers. We have never had a quarterback throw for over 4,000 yards (the only team in NFL history and we’re one of the original franchises). Nagy was the next great offensive mind when we hired him, and his offenses never ranked past 21st in the league while running his signature play, the 3rd and long screen pass for a 2 yard gain. Ryan Pace threw away draft picks like gum under a school desk, and only 2 of his first round picks since 2015 are still on the roster. Mitch Trubisky never meshed with Nagy and probably didn’t have the talent needed to live up to his expectations (a fault of Pace’s judgment) and is now riding the bench in Buffalo (Oh man, did I want him to be good).
Now I was once a naive, hopeful fan of this team. The 2018 Bears season featured an amazing defense, Mitch Trubisky looked promising and Nagy won coach of the year; comical, isn’t it? All was bright and the city was electric (no matter how much I slander this team in this article, the city of Chicago is and always will be a football city). One kick-which-shall-not-be-named later, and those seasons’ hopes were crushed and slowly the twinkle in the fans’ eyes died each passing mediocre season since then. The team fell back into mediocrity, Mitch was ushered out and the final stragglers of this era were finally removed with Pace and Nagy gone. But ah yes, how could I forget, Ted Phillips and George McCaskey will still remain in their roles and still have the power to hire both the new head coach and general manager, as they have so competitively proven to be able to do so with their disgraced previous hires out of jobs. I have no reason to believe things will get better other than the pitiful tiny voice in the back of my mind that unfalteringly supports this dumpster fire franchise through thick and thin, but the thin is only getting thinner. But who knows, hopefully I’m wrong and the Bears will hire the next stud head coach and savvy general manager, my heart tells me yes but my gut tells me no. These hopes will inevitably distinguish when McCaskey brings Mike Ditka out of retirement to rekindle that love for that oh-so-great 1985 team, and I’ll have to hear my 53 year old, quarterback-starved dad ramble on for the rest of eternity about Jim McMahon’s winning, champion spirit. The team is so unsavvy and archaic; boy, I hope they prove me wrong. While I crucify the team right now, I’ll of course find my eyes zapped to the screen next year, continuing this vicious cycle.

While that’s my current lack of optimism, here’s some other Neuqua student’s views, “…it’s definitely questioned my faith in the team but… I really think management will get it right for this time,” junior Akhil Yerramsetty said in regards to his confidence with the team. The undying faith is admirable and I hope Yerramesetty’s hopes don’t go unfulfilled, but as I’ve said earlier, there is no reason to have faith with this front office.
Junior Sean Kirchner offered some contrasting opinion, “Their history isn’t exactly fantastic, subpar in fact. I still am not confident about the next choice.” These differing opinions represent a large split of the Bears fanbase opinions.
Neuqua fans of other teams even weighed in on the discussion. “The Bears are gonna keep being mediocre until the end of our lives. I see Bears fans every Sunday just having an awful day,” said junior Maheen Kumar, a dreaded Packers fan. Fellow Packers fan JV Krol voiced his opinions on the team as well, saying “the best thing the Bears have done since hiring Matt Nagy is firing Matt Nagy.”
While typing these words of our hated, yet constantly superior rival, pains me more than anything, they ultimately remain true and sadly will continue to be true until us Bears fans are given any sign of hope.
Emmett Malloy, Neuqua’s resident Browns fan, shares his thoughts as a fellow victim of seemingly endless mediocrity, “I try not to think about it.” Malloy stated when asked about his thoughts of the historical failures of his beloved Browns. “I don’t expect more years of mediocrity, this year was a hiccup. I can only hope they do better next year.” Malloy claims, as the outlook for the Browns actually looks somewhat respectable.
Things turned around for them as they hold a somewhat decent team on the upswing, and Bears fans can only hope our future will turn the same; if the Browns fans can get through this, so can we.