Growing up Latino in the advanced programs 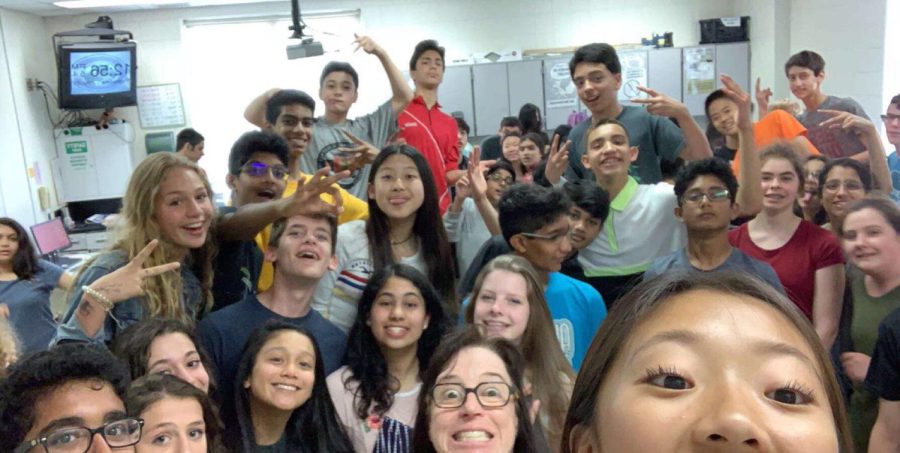 My 8th Grade science class featuring a large majority of the advanced program, Project Arrow. Most students in the program were Asian or white.

I was placed in the district’s advanced program, Project Arrow (PA for short), in the 4th grade. Throughout elementary and middle school, all my friends were the PA kids I met in those classes. There was one noticeable difference between my friends and me, however. I was the one and only fully Hispanic-identifying PA kid in every single one of my classes. While there were some other multiethnic students with second or third-generation Latino heritage, the overwhelming majority were Asian and a handful of white kids.

I never really noticed this difference until I was in middle school. My sole characteristic among the other PA kids was “that one Latino kid” in the class. One day, we played a game in which we named a classmate and wrote down their personality traits. My friends got traits like “funny” or “smart,” but when it was my turn, all my friends wrote down “Colombian” or “Latino.”

Some mentioned more insensitive topics. I was called “drug dealer” and “cocaine trafficker” regularly by the other students. I laughed it off back then, knowing they did not mean to be offensive, but I did feel it got excessive at times. Even my teachers joined in. My 7th grade English teacher refused to learn how to pronounce my name, referring to me only by “La Bamba” throughout the two years I had him. To be fair, I rarely brought up my dislike for the nickname.

In 8th grade social studies, we would watch CNN 10 at the beginning of class. My teacher would regularly pause the news video and add his own comments. This was around the time that the Venezuelan Crisis was receiving massive media attention, so the topic was frequently discussed in our class for several weeks. I’m not sure which is worse, Latin America being entirely ignored in a class about world history and geography, or the fact that the only time it’s ever brought up is when some massive political or humanitarian catastrophe occurs.

CNN 10 showed Venezuelan cartels smuggling cocaine across the Colombian border. The teacher paused CNN 10 and looked directly at me, saying with full confidence, “did you know that Colombia has a lot of drugs?” as if I did not know already. All I could do was wonder why he felt the need to express that dark spot in my country’s history directly to me in front of the class.

Moreover, as the sole Hispanic student in the class, I was expected to be the resident expert on everything Spanish. Sometimes the teacher would ask a student to share their opinions about something we saw on the news with the class; however, he would only ask me if the topic was about Colombia or another Latin country. While it was nice to have my voice heard, talking exclusively about the region’s negative aspects made me feel as if I was betraying my culture and reinforcing the violent connotation associated with Latin America.

This stereotyping was rampant throughout my middle and high school years. Talking to my friends about our parents’ jobs almost always went about the same way. They would talk about how their parents are computer scientists, accountants or lawyers. However, when I mentioned that my dad is an engineer and my mom is a psychologist, they would look at me funny and say how they wouldn’t have assumed it. One classmate even told me outright, “dude, I thought your dad mowed lawns.”

It got to the point where people didn’t even believe that I was Colombian. In those classes, where the considerable majority of students were East or South Asian, people would automatically assume I was also Asian. The thought of someone like me being in that class did not even cross their minds. The first week of my freshman year Honors Algebra 2/Trigonometry class I decided to sit in the back; the distance from the board was problematic when my contacts were dry, causing me to squint. My teacher asked if I wanted to sit in the front since I was squinting so much, but before I could respond, the class got into an argument about whether the teacher’s comment was racist or not due to my assumed Chinese descent. I was so confused that I didn’t say anything, but after about ten seconds, my friend stood up and told everyone that I was from Colombia. The guy sitting in front of me turned around and told me, “oh, I wouldn’t have guessed there would be a Colombian in this class.”

What got to me most, though, wasn’t the name-calling or the gross oversimplification of my identity; it was the underestimation of my abilities due to my ethnicity. I have always done pretty well in school, especially in math since I didn’t have to translate everything from Spanish to English in my head. But I was also very introverted and had a hard time communicating with others, part of which was due to a language barrier in my elementary school years.

One day in math class, our teacher announced that we were going to take a group test to qualify for the Illinois Council of Teachers of Mathematics (ICTM) state math competition. Everyone formed their groups, and I was left over. The teacher had to assign me to a group, which happened to have the smartest kids in the class. I felt really bad, as if I was going to pull the smart kids down. A girl who used to make fun of my Spanish accent said straight to my face, “Why do we have to have Lucas in our group?” After our group won the competition, the same girl said that I was surprisingly good at math. When I asked what she meant by “surprisingly,” she got uncomfortable and didn’t respond.

The first semester of my 8th grade science class was dedicated to a science fair project. We had to choose a topic, write a background research paper, conduct an experiment and present the results to the class. My project was on the efficiency of different methods to decrypt a cipher through Python. After I presented my project to the class, my teacher went up to me and managed to convince me to join the Illinois Junior Academy of Science (IJAS) fair. Along with ten other students, we competed in the regional and state fair competition. I got a $50 award for being in the top ten presentations, but a friend later informed me that I could have gotten a $200 Hispanic diversity award. My project was one of the top ten presentations in the state, but my ethnicity was deemed more important than the academic paper.

The constant reminder that I’m seen as different for my identity isn’t just the surprised reactions to my successes; it’s the lack of it when I fail. The worst essay grade I have ever gotten was in my sophomore year Honors English II class. My friends poked fun at each other when they got a similar score to mine, so I fully expected to be made fun of for my laughably low score. Instead of friendly ridicule, they saw my score, and one said, “oh yea, that makes sense. He can hardly write in English anyway.” Why would I be in an Honors English class if I could not write in the language?

I am not different from you. I study and struggle in school just like any other student. I play sports and join clubs just like any other student. While I am proud of my culture and family, I do not want or need to be special through an ethnicity I cannot control. I do not want my personality to be “Latino” and be your token Hispanic Honor Roll student. We preach racial equality, but it’s the little things like these that persist in our society. I am viewed differently due to my ancestry. I can’t change my nationality, but we can all learn to view past the lens of race.