Spring into break with some fresh recommendations 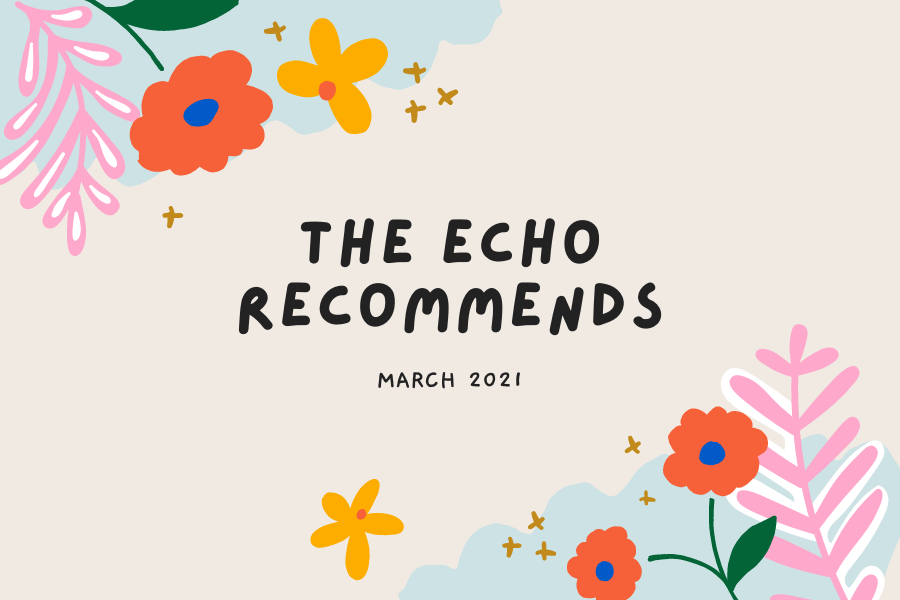 In the March 2021 edition of The Echo Recommends, The Echo staff provides some cool things to combat the warm weather with.

March has significance to many people: Women’s History Month, Irish American Heritage Month and at Neuqua Valley, it’s the month when students enjoy their spring break and prepare for their final semester of the school year. This year has undoubtedly been chaotic and stressful, and the week students have off should be spent relaxing rather than raging. We’re still in a pandemic, so we have to continue to be mindful of our surroundings, but that doesn’t mean we can’t have some fun. The Echo has provided some of their favorite recommendations for activities and media to consume to allow students to relax this break. We wish you a safe and healthy spring break!

Jason Verdin – “The Vanishing Half”

“The Vanishing Half” is a New York Times best selling novel by Brit Bennett, soon to be an HBO series. The book is historical fiction, and the plot centers around the Vignes sisters, twin sisters that are separated after they flee to New Orleans in 1960s Louisiana. Stella and Desiree grow up being pretty much inseparable until their separating incident, and after they are separated, Stella finds out that she can pass as white. The book is told through a series of flashbacks and alternating points of views as the readers follow the two different lives that these sisters have lived because of the color of their skin and how different those lifestyles have even affected the Vignes sisters’ children. The story examines elements of motherhood, sisterhood, race, identity and black identity. It’s written in a way that makes it difficult to put down.

“Cable Girls” is a Spanish telenovela based in the 1920s that follows the life of main character, Lidia Aguilar. She has just landed a job in Madrid’s first national telephone company. Throughout the show, the creators highlight the struggles of women during that time period and how they had to constantly work harder to reach the same places as their male counterparts. Though the morals of Aguilar are initially questionable, the creators do a wonderful job portraying the grey area that she knows her life as a woman has forced her into. The show even opens with the lines “Women were like jewels worn to parties to show off. Objects unable to express an opinion or make a decision. If you were a woman in 1928, being free seemed unattainable because to society we were just housekeepers, wives, or mothers. We didn’t have a right to dreams or ambitions. And others had to confront the norms of a sexist retrograde society. In the end, rich or poor, all of us wanted the same thing: to be free.” In honor of Women’s History Month, I highly recommend you watch this show on Netflix.

“Kajillionaire,” directed by Miranda July, is an odd and wonderful movie. The film stars Evan Rachel Wood as Old Dolio, the movie’s main character. Old Dolio is part of a family for whom money is a scarcity, and their only means of survival is small time thievery and trying to get as much free stuff as possible. Old Dolio’s family does not live an easy or good life, but it’s worse for Old Dolio, as she’s isolated with her obsessively cheap parents. “Kajillionare” is a tragic, heart touching and surreal film that everyone should watch this break.

Headspace is a mindfulness app that can get you better situated, mentally, for this spring break. The app offers guided meditation sessions that vary from three minutes to five minutes to ten minutes, with many different types of sessions like bedtime meditations or a daytime option to get ready for that day. You can also track your process to continue to stay motivated!

Frisbee golf at Knoch Knolls Park is a fun activity you can do with your friends and family. The goal of frisbee golf is to make the frisbee into the basket using the fewest turns possible. This activity is best played in warm weather with little to no wind.

Watching videos from Yoga with Adriene on YouTube is a relaxing way to practice yoga, whether you’re someone just starting yoga or you’re experienced and practice yoga frequently. The instructor, Adriene Mishler, creates yoga videos that can be done outside, on the go, or even in your own home. She recently released a 30 Day Yoga Journey for the month of January. Yoga is beneficial for your muscles, mental health and energy renewal. My favorite time to practice yoga is in the morning or after a long day at school to put my mind at ease.

Everyone knows people who take their laptop out, and they have  a whole bunch of stickers on the back. Maybe your classmate drinks out of a water bottle plastered with stickers. For a while, I wondered where they got them, and I found success where everyone does: Reddit. If you look up “free sticker links,” you will find an overwhelming amount of companies that will give you free stickers. All you have to do is send your name, address and the occasional “please send me stickers” message.

Embroidery is a great activity since you just repeatedly do repetitive actions and get a cool patch or hoodie out of it. The only things you’ll need to start are embroidery thread, a needle and an article of clothing or cloth, all of which can be bought at any store that sells craft supplies. Guides and demonstrations for different types of stitches can be found on Youtube and spring break is a great time to practice.

Chicago is a great place to visit in any weather, but in spring when the weather is not too cold or hot, it is an especially great time to explore different areas of and places in the city with friends and family. Additionally, now that some COVID-19 induced restrictions are loosening, it would be a great time to get out and see the beautiful city.

Miniseries “WandaVision” on Disney+ is a must-watch for fans of the Marvel Cinematic Universe. As Avenger Wanda Maximoff grieves the loss of the love of her life, she creates a world of her own to cope. But when the world that’s supposed to bring her happiness seems to be hurting her more, Wanda is forced to reflect upon her life and realize what’s best for her and others in her life. This show is the first time Marvel Studios truly takes a look at the emotional impact their films have on their characters and how they deal with them. Although it can hurt to watch, the execution is beautiful.

Released on September 28th, 2020, Genshin Impact is an open world adventure game available on PC, XBox, Playstation, iOS and Android. With an expansive, colorful world and a rambunctious cast to boot, the player takes control of the elements in order to explore landscapes, fight monsters, and upgrade gear throughout the ever-growing world of Teyvat. Alongside a main story and dozens of side quests, Genshin Impact is regularly updated with seasonal events, new regions, and new characters to pull through the game’s gacha system. While microtransactions are available, the game is free-to-play and comes with a colorful starting cast reminiscent of a classic RPG party. Whether looking for a new favorite game to kick back with or just looking for a game to fill the open-world hole left by the Breath of the Wild 2 trailer, Genshin Impact may be the game for you!

As the weather is getting nicer and nicer, you’d be missing out  just staying indoors and doing nothing. To enjoy the evening breeze and beautiful weather, take a trip to the Springbrook Prairie, and take a hike on one of the trails. The best part? Enjoying a nice sunset with a loved one on one of the benches in the sitting area. That’s sure to get me some extra brownie points from mom.

Anderson .Paak and Bruno Mars have teamed up to form a new band, Silk Sonic. Their first single, “Leave the Door Open,” released on Mar. 5. The song is a great blend of both artists’ unique sounds and styles and a sign of great music to come from the pair. With a debut album scheduled to release sometime in 2021, this new duo is certain to provide one of the funkiest albums of the year.

Citizen Queen is an R&B /pop girl-group that started in 2018 singing acapella covers. Their name came from wanting everyone to feel like royalty making that accessible.Their biggest music video is “Evolution of Girl Groups” having more than 3 million views. They now have their newest singles “Call Me Queen” and “No Ego” this year. This group radiates self-love, positivity and new beginnings for their career. If you want to find music that is upbeat and groovy for spring break, they are definitely worth listening to.

Needing an heir to his throne,  Prince Azeem, played by Eddie Murphy,  travels to Queens New York to find his long lost son and take him back to Zamunda. The movie confronts tradition, with Prince Azeem bent on making his incompetent son the heir instead of his well qualified daughter. Amid all the family problems, Zamunda is threatened by a neighboring country who threatens to wage war if the two countries aren’t united by marriage. Not wanting to marry, Prince Azeems son flees back to Queens and gets married to a house maid he brought back from Zamunda.

“Ruinsong,” a novel by Julia Ember is a fantasy that follows two young women who find themselves fighting for both their country and for the growing feelings they have for one another. The book was written by an LGBTQ+ author and features a well written romance between the two main characters, Cadence and Remi. Cadence is a powerful mage who has been used against her will for a long time by a corrupt queen and Remi is a childhood friend who turns out to be part of the rebellion. If you are into an enemies to lovers stories then this book may be for you.

With temperatures starting to rise, and the sun beginning to show its warm face from behind winter clouds, getting outside is on everyone’s to-do list. What better way to soak up the sun than a picnic? Grab a few friends (and masks), your favorite snacks, drinks and a blanket. If you’re feeling crazy, try your hand at a culinary presentation and make a charcuterie board. Head over to your local park, and you’ll be all set to enjoy this spring weather while being safe!

You should read the trilogy written by Leigh Bardugo in preparation for the show of the same name releasing in late April on Netflix! It’s a fantasy trilogy about darkness as a place, told by a girl named Alina who discovers she has the power to summon sunlight. The show is releasing April 23 this year, but the books have been out for almost a whole decade.

Beatrix, according to beatrixrestaurants.com, is “a neighborhood coffeehouse, restaurant and meeting place in Chicago’s River North, Streeterville, Fulton Market and Oak Brook neighborhoods.”  Founded by Rita Dever,Susan Weaver,  and Yasmin Gutierrez, all three of them being chefs, with Gutierrez specializing in pastries, these three women are cooking up delicious meals that satisfy every customer. Additionally, Beatrix is a Lettuce Entertain You restaurant, which includes some of the most high end restaurants that serve up fantastic food and engage their customers with the setting or presentation of the meals.