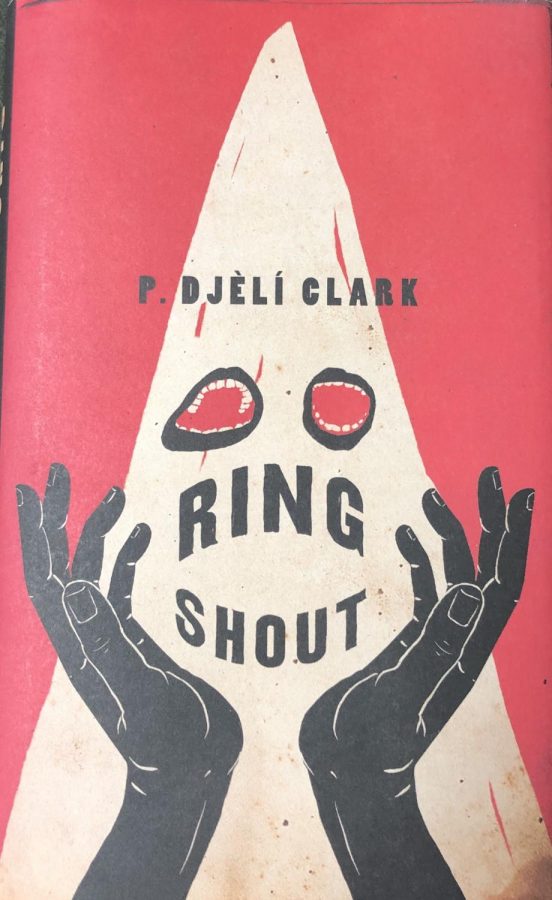 Pictured here is the hardcover version of "Ring Shout" by P. Djeli Clark, which shows a demon summoned by the KKK

P. Djeli Clark’s “Ring Shout” is a literary masterpiece that takes place in an alternate history of 1920’s America, where D.W Griffith, director of the Ku Klux Klan propaganda film “Birth of A Nation,” (a real film) is a sorcerer. The showing of the film is a ritual that summons larger than life demons with skin as white as Klan robes and pointy heads. These monstrous demons help the Klan grow more powerful than the country had previously seen. This story follows a trio of young Black women, Maryse Bourdeaux (the character from whose perspective we read), Chef (a bisexual WWI veteran) and Sadie (a witty sharpshooter) whose goal is simple: kill these demons and fight against the Klan anywhere and everywhere.

“Ring Shout” isn’t a single minded bloody revenge affair, though there is blood, and Maryse, our main character, is certainly out for revenge. “Ring Shout” isn’t a nonfiction tome exploring the history of the oppression of Black people in America; however, through Maryse’s eyes we certainly see that oppression and its roots. “Ring Shout” evades easy categorization because its main characters are well-developed, have clear personalities and are eminently likeable. Each of the characters has their own traumas, dreams and quirks, all of which are up to the standards of a full length novel, yet Djeli Clark does it in less than 100 pages. The story of “Ring Shout” easily matches the high quality of its characters, following them as they fight against monsters in high octane action scenes with wonderfully kinetic writing and in the womens’ peaceful moments. Djeli Clark never forgets these are young women with traumatic pasts who have others they love and care about. He beautifully illustrates that pain and joy in the quiet moments.

Djeli Clark’s fantastical characters, those who are without a doubt far from human, are not treated as entities with unknowable motivations. They are much more than your bog standard, cardboard cut-out mythical beings. Conversely, Djeli Clark avoids making these characters too similar to humans, as each is distinctively inhuman. He manages to strike a perfect balance between flat, unknowable antagonists/allies and humans under a different name, leading to each of his non-human characters having their own mystery that Maryse, Chef and Sadie must unravel. Those unravelings are incredibly satisfying, alternatively bone chilling and jaw dropping.

“Ring Shout” is more than a novella with compelling characters all-around and a well paced plot. Djeli Clark’s prose is beautifully minimalistic, and he examines complex themes with a deftness rarely seen. By the end of this wonderful little novella, I was in tears. “Ring Shout” had more of an impact on me than any other book I’ve read this year, novella or full length.