A simplified summary of the second presidential debate of the 2020 election, organized by topic. 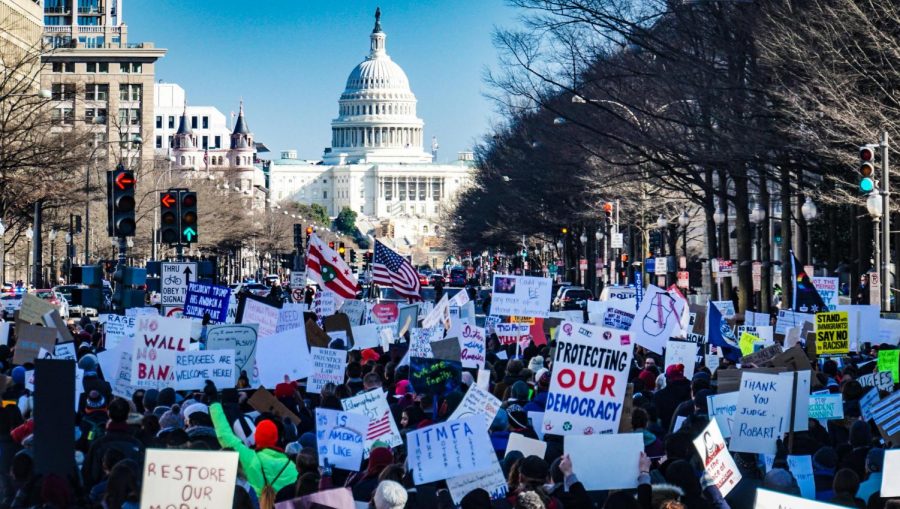 Protesters gather in front of the United States Capitol building, advocating for democracy. This election has been described as what will determine the fate of our democracy, and many Americans have registered to vote in hopes of gaining representation of their voice.

The second and final presidential debate of the 2020 election was held tonight, Oct. 22, 2020, at Belmont University in Nashville, Tennessee. Kristen Welker moderated the debate between President Donald Trump and former Vice President Joe Biden. A change made to prevent interruptions was that microphones were muted after each candidate was given their two minutes to speak, but the mics remained on during open discussion. The topics discussed by the candidates tonight were COVID-19, national security, American families, race in America, climate change and a final question regarding inauguration day.
COVID-19
Welker asked how Trump and Biden will lead the country during the next stage of coronavirus.

Trump: President Trump claimed that there is a “vaccine that’s coming” within weeks that the “military is going to distribute.” He believes that he is immune to the virus and also described that he was able to test a therapeutic drug while he had COVID-19.

Biden: Vice President Biden wanted to “make sure we have everyone encouraged to wear a mask, [secure] rapid testing” and aims to set “national standards” for opening.  He vowed to be “totally transparent” with all testing and processes.

Trump claimed that the American people are “learning to live with [the virus]” and that the nation cannot be closed “or [we are] not going to have a nation.” Biden challenged this by saying that “people are learning to die with it” and that we are not in control. This led to discourse on how the mental health effects of isolation outweigh the risk of exposure. Biden wants to “shut down the virus, not the country” and says that standards need to be set to reopen; however, in order to reopen, he claims resources need to be accessible. Trump meanwhile argued that “the cure cannot be worse than the problem itself” and urged the reopening of the country.
National security
How will the candidates deal with election integrity, considering the recent reports of interference from Russia and Iran? How will they put an end to this for the next term?

Biden: Biden stated that “any country that interferes… in American elections will pay a price” because they are “interfering with American sovereignty.”

Trump: Trump accused Biden of taking money from other countries, to which Biden retorted “release your tax returns, and stop talking about corruption.” Trump claimed that he wants to release his tax returns as soon as he could, but the IRS “[treats him] horribly.”

The personal relationships of each candidate with foreign countries were also discussed.

Biden on Ukraine: Conspiracies involving corrupt activities while Hunter Biden worked for Burisma, a Ukranian gas company, and Biden was the Vice President have been circulating. Trump’s own staff claimed that “[Biden] did [his] job impeccably” regarding Ukraine and that not one single “solitary thing was on line.”

Trump on China: Trump was found to have a bank account in China, and he was asked if this was a conflict of interest. The President described how he was a “businessman doing business” and had an account in 2013 but chose to close it and not do a deal with them in 2015.

Each candidate described how they would respond to China’s handling of the coronavirus. Biden wanted to “make China play by the international rules” while Trump would force China to “pay billions and billions of dollars.” Another country discussed was North Korea and the nuclear war. Trump chose to ignore the nuclear war and describe his strong relationship with China, while Biden ensured that North Korea “cannot hurt us” and urged denuclearization.
American families
How will the candidates support families in relation to insurance and healthcare?

Trump: Trump plans to “terminate the individual mandate” and build a “brand new beautiful healthcare.” He did not have a clear plan or description to share but noted that preexisting conditions will stay.

Biden: Biden will “pass Obamacare with a public option… reduce premiums and drug prices.” He supports “private insurance” and strives to protect people with preexisting conditions. To him, “healthcare is not a privilege, it’s a right,” and he argues people deserve it at an affordable price.

Trump was asked why he has not provided people with resources and money as they are out of work, and he chose to describe that Nancy Pelosi does not want to approve it. Similarly, Biden was asked why he has not pushed Democrats for more funding, but he claims that he has and that people deserve “a minimum wage of $15.”
Race in America
Currently at the border, parents of many children cannot be located. The candidates were asked how they will reunite these kids with their parents.

Biden: Biden, however, claimed that these children being separated from their parents “violates… who we are as a nation” and that these kids being alone is “criminal.”

With foreign policy being a large issue at the moment, each nominee shared how they view immigration laws. Biden said that “it took too long to get it right” but with the power of being president and not VP, he will provide citizenship to immigrants and that “DACA kids will be immediately certified,” allowing them to stay in the country. Meanwhile, Trump argued that immigrants who are told to come back “never come back… those with the lowest IQ, they might come back.”

People of color have been forced to speak to their children about how they may be targeted as a result of their race. The nominees were asked if they understand why parents are worried about their children, to which they replied that they do understand. Biden described that he has a clear plan to “hold these truths to be self-evident, that all men and women are created equal.” Meanwhile, Trump claimed that “nobody has done more for the black community than Donald Trump.” Trump went on to say that he was “the least racist person in [the debate room],” causing Biden to sarcastically call Trump “Abraham Lincoln.” Biden admitted he made a mistake with the 1994 Crime Bill and called for change, while Trump talked about how he thought the BLM movement “was a terrible thing” at first.
Climate change
How does each nominee plan to combat climate change and support job growth simultaneously?

Trump: Trump plans to become “energy independent” with “many programs” such as the Trillion Trees program.

Biden: Biden wants to reenter the Paris Agreement, an international treaty to care for the climate, prevent the leakage of energy in buildings and “create millions of jobs.”

Both candidates agreed that Biden’s statement on wanting to move away from the oil industry was a highlight of the night.
Inauguration Day
Each candidate was asked to imagine that it was Inauguration Day. What do they plan to say to the American who voted against them?

Trump: Trump spoke to the people and said that “we have to make our country successful as it was before the plague … success is going to bring us together.”

Biden: Biden described himself as “an American president. I represent all of you… I’m gonna give you hope… what is on the ballot here is the character of the country… and I’m gonna make sure you get that.”

The election is in less than twelve days, on Nov. 3, 2020. If you are interested in voting, find out more information for your specific state at vote.org