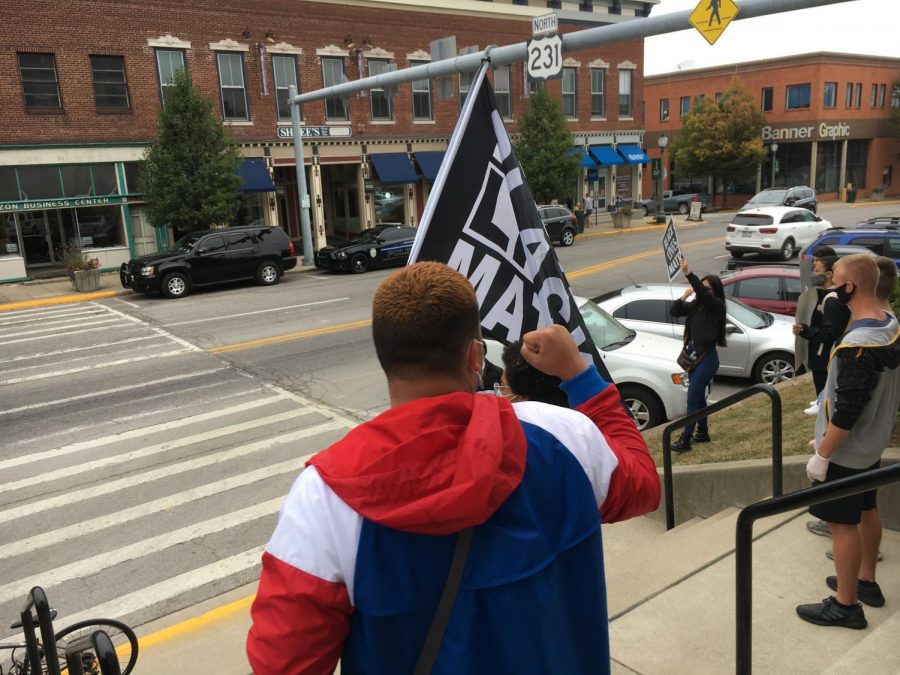 A Black Lives Matter protest taking place in Greencastle, Indianna which was faced with a pro-cop counter protest.

“For God and Humanity”

Both sound like noble missions, a force for good, but both represent deeply and inherently flawed institutions- institutions that have in the past century faced a reckoning. In 2002, The Boston Globe’s Spotlight team released a damning report revealing that the Catholic Church had been covering up widespread sexual abuse by its priests. The Catholic Church’s decades-long efforts to silence any attempts to reveal the sexual abusers among their priests and continued denials after the release of the report and thousands more of its kind was predicated on one primary argument: “It’s just a few bad apples.” Does that argument sound at all familiar? If you’ve been paying attention to the news in the past few months (more specifically since May 25th, the day George Floyd was murdered in cold blood for being black by Derek Chauvin, an officer of the law, and protests were launched across the nation under the Black Lives Matter movement), then you’ve surely heard someone say “Oh they’re not all bad, it’s just a few bad apples” in response to calls for police reform or to defund the police.

Defenders of the Catholic Church relied on that argument to justify handling sexual abuse allegations internally, where they could offer victims meager or nonexistent sums, silence them and make promises they had no intentions of keeping. Modern police have a version of this practice too. They prefer to keep everything in house- avoiding courts whenever possible- but police have an extra tool to suppress allegations and avoid consequences: qualified immunity. Qualified immunity is where cops have broad legal immunity from prosecution for violating the law in actions related to carrying out their duties unless a high standard is met showing they knowingly violated those rights. Theoretically, this is in place so that officers can perform their jobs without constantly worrying about being sued. In practice though, qualified immunity allows officers to assault, murder and treat people without a shred of dignity and be met with near absolute impunity. The Church avoids prosecution with false promises, hush money and shame, while the cops do it by abusing a law to exercise their powers however they want. Both are horrific, but when one was exposed widely in 2002, the world called for change with shock and horror. The police’s protection of murderers is already on display; It has been for years. Michael Brown, Breonna Taylor, Stephon Clark, Philando Castille, Eric Garner, Tamir Rice and many, many more names. There are hundreds more, and I could spend this entire article naming them and it would be multiple pages long. Of the names I listed, not one of their murderers has been convicted of anything- many were never charged, they walk free, get to experience life- unlike their victims.

The similarities between the frankly catastrophic police brutality problem in America and the Catholic Church’s sex abuse cover-up do not stop at their preference to keep their members’ inhuman crimes in house. It extends, rather, to their cultures. The Catholic Church is an intensely fraternal and secretive organization, with the cover up of sexual abuse extending to the upper echelons of the Vatican. No clergyman is willing to report one of their own, even if he rapes children. Clergy can attempt to excuse sexual abuse six ways to Sunday (it is the Lord’s day after all) to protect one of their own. Either it never happened, the child mis-remembered,  the priest had no ill intent or the child was simply serving the priest- and therefore God. Any allegation in their eyes is simply blasphemous, an attack on the Church and God himself. The police are similar, as they are a brotherhood- “brothers in arms.” In their view, they believe they are soldiers at home, protecting the good ol US of A. If a fellow officer kills someone, even if they are unarmed and accused of something as miniscule as one counterfeit bill, then they will defend them vehemently, for they see it as an attack on their force and their brother.

Not only do both the Church and police forces in America do as much as they can to keep allegations internal, morality and legality be damned, but they also silence those within their organizations who try to speak against the leadership and culture’s suppression. An African-American Atlanta police officer made a TikTok speaking about the illegality of the murder of George Floyd, how his technique was wrong and the overall wrongness of the whole situation. He was later fired. Richard Sipe, a priest who was also a trained psychotherapist, realized the magnitude of the Catholic sex abuse problems and tried to come forward. The Church attempted to discredit him and continued to do so until his death.

The law enforcement system in America is as fundamentally broken as the Catholic Church is, and it is time for a reckoning. Our policing system is an institution that enables hate crimes and protects those who commit them. Saying the problem is just, “a few bad apples,” undermines the pain of those affected and wrongly pins the issue on a few individuals alone rather than the system that protects them as well. Pedophilic priests are monsters, and the Church is wrong and broken for protecting them. It is time that America viewed hateful, murderous cops and the broken system that hands them the gun, cleans up the body, and stands in the way of any form of justice in that same corrupt light.