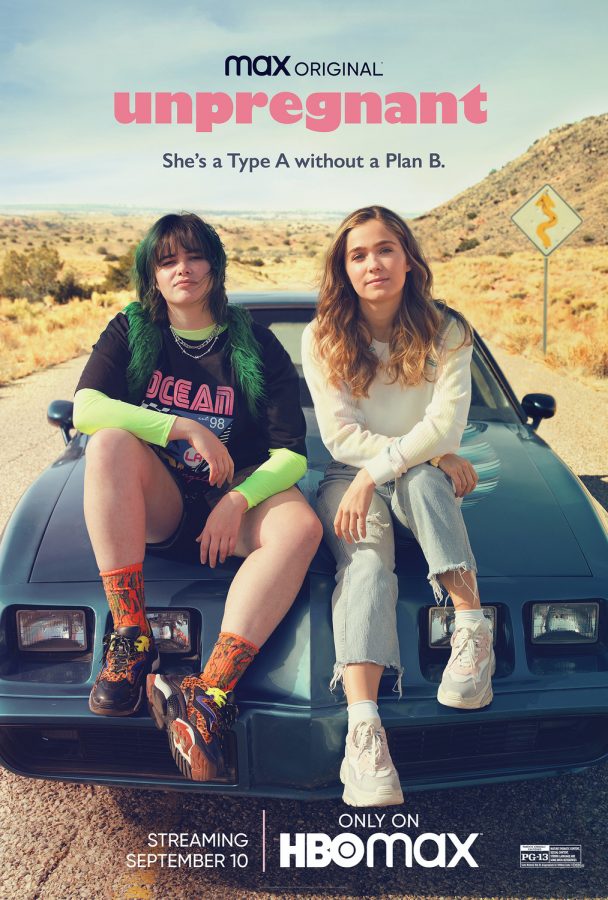 “I’M PREGNANT AND I’M GETTING AN ABORTION” is maybe the best dialogue from ‘Unpregnant’ to define what kicks off the plot. The film is an HBO Max original, written and directed by Racgel Lee Goldenberg, based on a novel of the same name by Ted Caplan and Jenni Hendriks. It stars Haley Lu Richardson and Barbie Ferreira, who play two estranged friends growing apart over the course of their high school career. They then get together for one spur of the moment but very important road trip from Missouri to Albuquerque, New Mexico.

Haley Lu Richardson plays Veronica Clarke, a straight-laced popular student who ends up getting pregnant by her ‘nice guy’ boyfriend, Kevin.  Since she doesn’t have a car, she cannot tell her parents and has nobody else she can trust with the information about her pregnancy. She recruits Bailey Butler, a gamer goth lesbian who she was close friends with before high school. The two start on a road trip with a plan to return in a night, before either of their parents could find out. Obviously, since no road trip in a movie ever goes perfectly, the shenanigans ensue.

Despite the humorous tone of the movie, they treat the subject of abortion with the appropraite sensitivity. Our main character, Veronica, can’t even call it for what it is until halfway through. The movie flat out avoids appealing to a right-winged audience – its intent is to sympathize with the increasing obstacles placed in the way of those who want an abortion. In many US states, notifying one’s parents is just one of multiple prerequisites to getting the procedure. There is a waiting period, where the patients are forced to watch anti-abortion information and ultrasounds, all aimed towards having the patient change their mind. Now with the death of Ruth Bader Ginsburg, it seems more important that that we discuss the topic of abortion bans and how to make sure women are allowed to make their own decisions.

Veronica reaches a breaking point in the movie. After she gets chased by a radical Christian activist in a bus trying to convince her that she’s making the wrong decision, she yells at the sky for making her go through all this when she has done everything right in her life. She has good grades and has made good decisions throughout her academic career. Veronica has curated a life that no college could deny admission to. She is in a monogamous relationship with her boyfriend and practices safe sex. “It’s not fair,” she screams, “that you need parental permission to have an abortion, but not actually give birth.”

The film places a lot of importance and time on the friendship between our two main characters. Bailey and Veronica might be completely different as people, but the spark they had as kids remains well into their teenage years. It is a little rough at first, but the film is intent on highlighting the strengths in the relationship, rather than the weaknesses. They hit the mark with each extravagant moment. More emphasis is placed on the situation itself, rather than any emotional reaction to it- which only serves to further show how strong this friendship is.

The ending is not extravagant at all – just a smile from one best friend to another. It is a fitting ending for a movie jam-packed with emotional topics. “Unpregnant” does a good job balancing its humour with sensitivity and gets its point across well. However odd the film may be, you will end it with a smile on your face.