Harley Quinn: Birds of Prey, From the Eyes of an Unreliable Narrator 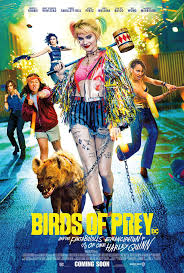 ‘Harley Quinn: Birds of Prey’, was released on February 7th, 2020. It is part of the DC Extended Universe (DCEU), and takes place a little after the movie ‘Suicide Squad’. Margot Robbie comes back to play her brilliantly-casted role as the infamous Harley Quinn, who was previously known as Harleen Quinzel, until she ran away and joined the circus and fell in love with the Joker.

It opens with Harley talking about her origins and giving her audience a backstory that helps us understand where all her underlying anger and dysfunctional behavior stems from. For those unfamiliar with the comics or any previous adaptations, it’s a good way to lay some exposition.

Harley Quinn is an incredibly unreliable narrator, and she flashes back and forth through the whole plot. She skips important details and whizzes us back when she eventually remembers them by encountering a plot hole. But in the end, the story does get across well, and we get the whole picture by almost exclusively following the lives of just the female characters.

Ella Jay Basco does a wonderful job at thirteen-years-old, playing Cassandra Cain, the young ‘problem child’ who picks the wrong pocket and is a catalyst for everything that happens in the movie. And it’s worth mentioning that both the producer, the screenwriter and the director are women. It really does feel like an all female ensemble, on and off camera.

Director Cathy Yan did a very good job incorporating diversity into her cast. The ensemble is almost fully female, and yet it doesn’t seem to overbearingly scream ‘girl power’ into our faces. The introduction of a female squad is seamless as they bond together over problems that are very subtly female, like getting cheated out of a promotion, trying to keep your head down at work while simultaneously protecting women that are being harassed. There are women of colour and gay characters, but they are so well integrated that they don’t seem to exist for brownie points.

The fight sequences are a little lackluster in terms of fight scenes as a whole, but maybe we have to accept that nothing can live up to Endgame’s final battle. Like a well-choreographed dance, the fight sequences in Birds of Prey are still beautiful to look at. The movie’s saturated colours glow bright neon and Cathy Yan gets a chance to play with mirrors, as they slide into a House of Mirrors.

This fantabulous emancipation of one Harley Quinn, filled to the brim with insanity and colors brings her story to life in a way her previous adaptations did not. It takes away the single biggest thing that makes Harley herself, and the very reason her character was created, and that is her relationship with the Joker.

In this movie, she finally breaks up with him, which she publicizes by blowing up the chemical factory where they fell in love. It explodes in a burst of color, maybe symbolizing Harley’s explosive fun self that she finally separated from a toxic relationship.

While the movie takes away the very reason Harley was made, they still retain an essence that is purely Harley Quinn. The quick outfit changes, an action scene in rollerblades, an impromptu dance number  and a pet hyena are all something you look at, and then dismiss. Harley is telling us this story after all. We see things how she sees things.

When Harley Quinn was introduced into the DC universe, through an animated TV show, she was made solely for the purpose of being the Joker’s love interest. It is an essential part of Harley, that she remains in love with this madman, forever and always wanting to live in servitude of her Mister J. But this movie specifically drags her away from that, instead opting to focus on her relationship with the world around her, and more significantly, the women around her.

Overall, Harley Quinn: Birds of Prey manages to portray a good story of female camaraderie and their relationship to the world around them. The cinematography is well done and pleasant to look at albeit a little underlit at times. It is one of the better movies DC has made, and far better than its predecessor ‘Suicide Squad’. It did well in the box office, making 33 million domestically and 81 million worldwide. It goes to show that women, as villains or heroes, may just be the future of the cinematic universe.