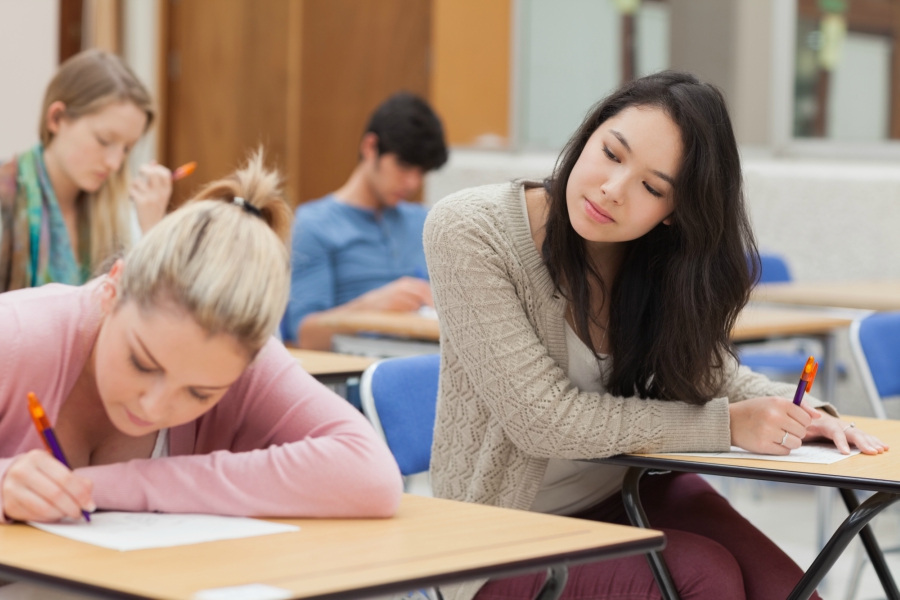 One of the many methods of cheating: looking at someone else's answers

Where there are stakes, there is dishonesty. Cheating is a problem that affects many classes  at Neuqua Valley, and it is something that needs to be addressed. It is a serious offense with severe consequences, but that doesn’t stop students from doing it.

With Chromebooks mixed into the traditional classroom setting, it’s become even easier to cheat than before the advent of technology in the classroom. Papers and answers have become a lot more accessible. Before one student would share  their answers with another, but now with a few clicks, students can buy whole essays to pass as their own. Dr. Lance Fuhrer, the Principal of Neuqua Valley, talked about plagiarism in schools. Although it can be easy to plagiarize, it has also become easy to find people that do. He mentioned that “the tools that we have at our disposal, not only Google, but also some other tools that we use allow us to run papers through a little bit of a search engine.”

When talking to Michael Rossi, an English teacher here at Neuqua Valley, he spoke about the reasons a student might cheat. He mentioned, “the more practical reason is that the students pressure, and the students time restrictions and the students calculation of likelihood of consequences for cheating leads them to do so.” There have also been instances in which students simply were not aware that they were cheating. It might have been that the expectations of the assignment were not made clear, but students have collaborated or worked together on an assignment that was meant to be done alone. These instances, as innocent as they may be, are classified as cheating.

But cheating itself is an act of desperation. It is a result of pressure from colleges, and the expectations they have for themselves. Rossi added that “Students do it because they’re in a bind. You know, they have little time, they might have little sleep, they might need a particular mark or a particular grade”. Rossi elaborated that cheating is less about disrespect to the teacher or the class itself. It’s more of an urgency to please, to ease intense pressure on themselves. When a student cheats, they create a permission structure, where they allow themselves to cheat, that makes it easier for them to cheat the next time, and the next.

But cheating has its consequences. When a student is found to be cheating, they receive a zero on the assignment and sometimes parents can be called. When asked about catching people who cheat in his class, Rossi said, “A teacher has to be a little bit of a cop”. As teachers, they do have to make sure to watch their students a little bit. But as professional educators, they also have to ask themselves how they are contributing to the conditions that lead a student to cheat.

On top of getting caught, the student also has to deal with their own conscience. It may be easy to allow themselves to cheat in the moment, but as Rossi explained, “ No kid wants to go into a program thinking to themselves ‘I’m only here because I was duplicitous or dishonest, I’m not here of my own merit.’ Where you go, you want to feel as though you made it on your own merit. I don’t think the kids want to cheat.” He went on to say that “I have to believe, as a teacher, that every kid wants to do his or her best work, and that every kid wants to do his or her most honest work. I really have to believe that.”

In the end, cheating isn’t an act of disrespect, or dislike. It is about making choices in a moment of desperation and not knowing what else to do. Teachers could communicate to each other, understand that students have to meet expectations from more than just themselves. Some teachers have already made homework optional, or have even stopped assigning homework, to stop adding to the workload students deal with. And Rossi has made it clear that he would rather have a student ask for an extension than cheat on a test or assignment. And while that might not be possible for all classes, teachers need to understand the pressure on their students.

Rossi states, “I know why they do it, and I don’t judge them. I wish they made different choices, and I wish that every student who cheats would instead come to me and ask for an extension on an assignment or help or some way to complete the assignment without cheating I don’t want students to have to cheat, and I want to help them be successful and know that they can be successful.”